Blog › Celebrating 500 years of the Royal Mail at Postbox Shop 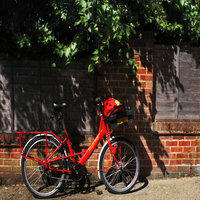 The postal service was originally created in 1516 when Henry VIII knighted the first Master of the Posts, Sir Brian Tuke. Although originally only accessible to the king and the royal court, Charles I opened the postal service to the public in 1635, later becoming a public service with the passage of the Post Office Act in 1660. These were humble beginnings, employing just 45 sorting and delivery staff in London by 1665 compared to the 140,000 employed by Royal Mail today.

The postal service underwent significant reforms in the 1800s, some of which were outlined and overseen by Sir Rowland Hill. His proposals included setting postal rates across the country based on weight and introducing the world's first adhesive stamp in 1840 - the 1d Penny Black, which featured Queen Victoria. The Penny Black stamp made it more affordable to send post and in the years that followed there were large increases in the amount of mail being sent - from 67 million in 1839 to 242 million by 1844.

Over the years, the way post has been transported by Royal Mail has changed too. Post-boys carried mail on horseback between towns in the 1500s, but by the late 1700s horse-drawn coaches with Royal Mail livery transported post. Mail started to be transported by train with the creation of the Liverpool to Manchester route in 1830. To celebrate the coronation of King George V, the first scheduled airmail service flew from Hendon to Windsor in 1911.

During World War One, a significant amount of letters and parcels were sent to loved ones fighting abroad. At the peak of demand, 2,500 staff handled 12 million letters and a million parcels in a week.

Uniform has also played its part in the evolution of Royal Mail, changing from the gold braided scarlet coat and black top hat of the 18th Century London letter carriers to the distinctive red waistcoat of postmen in the mid-1800s. When thousands of women were recruited to replace men fighting in World War One, a special women's uniform was introduced in 1915, featuring a straw hat. In 1941 the General Post Office approved women's trousers, named "Camerons" after postwoman Jean Cameron who requested their introduction.

Perhaps one of the most noticeable changes to the appearance of the Royal Mail is the iconic 'pillar' post boxes, which were introduced to the UK from France by post office employee and Victorian author Anthony Trollope. The first pillar box - a dark green octagonal box - was erected in Jersey in 1852. The oldest working post box in the UK dates from 1853 and is in Barnes Cross, near Sherborne in Dorset. There are now more than 115,000 Royal Mail post boxes, including decorative post boxes of various shapes and sizes across the United Kingdom. Post boxes carry the insignia, or cipher, of the monarch reigning at the time of placement, which further reminds us of the ‘Royal’ endorsement of this important postal service anniversary.

Do you need a postbox?

If so then look no further than Post box Shop, who only source their products from reliable manufacturers in the UK and Europe where we can guarantee that only the finest materials are used. We will not import and supply the inferior goods from the Far East that are readily available in today’s market on other websites and retail outlets. You can be assured that you only receive products of the finest quality. Most of our products comply to BS EN:13724 and Secured By Design New Homes Guide 2014.

Post box Shop can cater for all styles and tastes whether you require a traditional or modern post box, we will have the solution.

If you require any advice regarding any of our excellent products, please contact us.